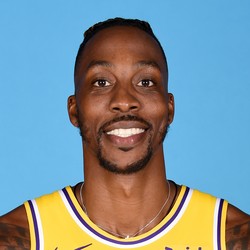 Dwight Howard to play in Orlando, will donate game checks to charity

Lakers center Dwight Howard has decided to participate in the Orlando restart and will join the team on Thursday.

Not only has the eight-time All-Star decided to join his team in Orlando to finish the season, he has also made a pledge to donate his remaining game checks to his non-profit charity "Breathe Again". Continuing to prove that he is one of the most respected voices in the league, Howard's presence should be huge for the Lakers in Orlando. In 62 games before the NBA season was suspended, the 16-year vet was averaging 7.5 points and 7.4 rebounds while playing 19.2 minutes per game.