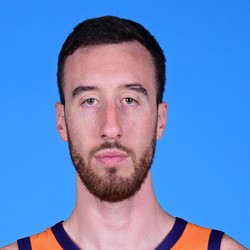 Frank Kaminsky (knee) is fully healed and 'good to go'

Suns F/C Frank Kaminsky is reportedly 'good to go' and was cleared to begin workouts on March 11th.

Kaminsky has been recovering from a right knee patella stress fracture that he sustained on December 28th. Video surfaced of Kaminsky participating in voluntary workouts at the Arizona Veteran Memorial Coliseum and even though the Suns are clearly out of playoff contention, Kaminsky said “I’ll go to Saturn to play basketball right now.” Clearly he's just anxious to return to the court - as the NBA continues to work through several scenarios to finish out the remainder of the season. Having played a majority of his minutes at center this season, Kaminsky is coming back to a bit of a log jam with Deandre Ayton now back in his starting role and Aron Baynes playing well in Kaminsky's absence. Through 32 games this season, Kaminsky averaged 11.5 points, 4.9 rebounds, and 2.2 assists in 22.4 minutes per game.