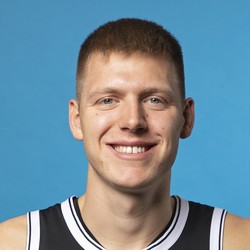 Henry Ellenson scores 12 points in loss to the Pistons

Henry Ellenson scored 12 points, had four rebounds, and two blocks in 21 minutes off the bench in a 115-89 loss to the Piston.

Ellenson finished the season averaging six points, 3.5 rebounds, and 0.8 assists a game. The former 2016 first pick from the Pistons had a few good games, but the Knicks will most likely pass on picking up his option because he is a inconsistent defender and rebounder.