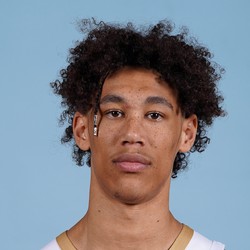 Jaxson Hayes collected two points (1-3 FG) and two rebounds over four minutes in the Pelicans’ 117-109 loss to the Rockets on Sunday.

Hayes logged his fewest minutes since December in Sunday's loss, and his role has continued to diminish with the return of Zion Williamson. In six games with Williamson in the lineup, Hayes has averaged just 5.0 points and 2.3 rebounds across 11.3 minutes in that span. He belongs on the waiver wire outside of dynasty leagues at this point.