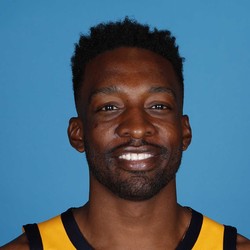 Jeff Green crashes back to earth with three point-performance

Jeff Green mustered up three points (1-6 FG, 1-6 3PT), two rebounds and one assist across 21 minutes off the bench during the Rockets' 117-111 victory over the Lakers on Tuesday.

After a string of impressive performances, Green struggled to get anything to fall on Tuesday night. Coming into the game, the 12-year vet was averaging 18.3 points over his last three games while shooting an impressive 75 percent from the field. That was not the case on Tuesday, however as Green was able to knock down one of his six shot attempts against the Timberwolves. He will look to get back on track in Thursday's tilt against the Lakers.