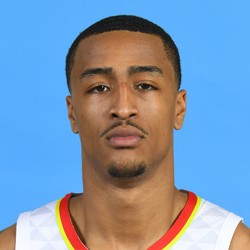 John Collins will be available to play for Wednesday's game against the Knicks. He popped up on the injury report with an ankle injury.

Collins can be used in all fantasy formats Wednesday. He will face off against the Knicks and makes for a fine play. His FanDuel salary is $8900 and he enters the night with the fourth highest ceiling and floor on the slate. In his last match up against the Knicks, Collins went for 58.7 FD points and has averaged 37.4 FD points in his last three match ups.