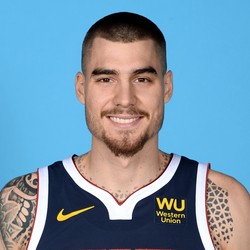 When asked about newly-acquired F Juancho Hernangomez’ future in Minnesota, Timberwolves President of Basketball Operations Gersson Rosas stated, “We want those guys [Malik Beasley and Hernangomez] to be Timberwolves for a long, long time. Hopefully, for the rest of their careers.”

Hernangomez and Beasley were acquired by the Timberwolves in a mid-season blockbuster trade that involved the Nuggets, Hawks, and Rockets. Both players sought more playing time than they were getting in Denver. Hernangomez was a former 15th overall pick back in 2016. He never averaged more than 5.8 points and 19 minutes per game in any one season in his career. That all changed when he got to Minnesota. He immediately became a starting forward, averaging 12.9 points, 7.3 rebounds, 1.3 assists, and one steal in almost 30 minutes per contest. He was even shooting a lights-out 42% from long-distance. It’s no wonder Rosas would like to keep him in Minnesota long-term, as Hernangomez showed what he is capable of doing in just 14 games with the Timberwolves.