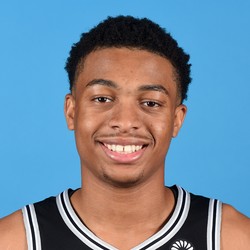 It was a surprising night for the rookie, as he entered the contest having totaled just four points and three boards across 12 minutes in four prior games. The Kentucky product has played most of the season with the G League Austin Spurs, but there's a chance he sees more run down the stretch with San Antonio languishing at 24-32 in the competitive Western Conference.