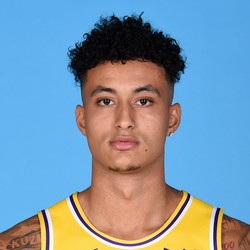 Kuzma is not starting but still gets plenty of opportunities to contribute. The volume is there, as he attempted 11 shots (including six three-pointers) against Milwaukee. If he could have made a few more shots, it could have been a big game. Kuzma is clearly the top bench option for the Lakers in terms of minutes and could be a decent pick-up in deeper leagues.