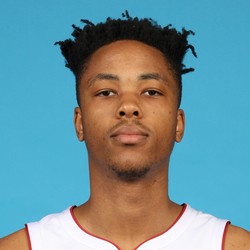 “Once mid-January came around, we saw the strides. He was feeling more comfortable with the ball in his hands. The game was slowing down for him. The greatest things he was doing were on the defensive end, making an impact guarding multiple positions. At times, he was switched onto [centers], guarding both forward positions, being versatile, doing a great job on the glass. All those things were positives," Simon added. Okpala averaged 1.4 points, 1.0 rebounds, 0.4 steals and 0.2 blocks across five games for the Heat this season. The 21-year-old dealt with an Achilles injury earlier in the year and was sent to the G-League in December. Based on these recent comments, the Heat anticipate keeping Okpala on the roster once the 2019-2020 NBA season resumes.