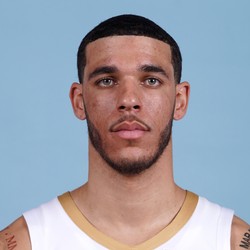 Lonzo Ball has really taken a step forward throughout the past month offensively. He has shown massive improvement with his jump shot and after nailing four three's on Sunday, the third-year pro has now averaged more than four three's per game during the month of March. He did commit a season-high seven turnovers on the night, but fantasy owners have to pleased with the type of production they are receiving from Ball. He will look to keep up the impressive play during Wednesday's tilt against the Kings.