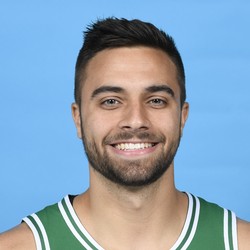 Max Strus leads the Celtics in scoring on Sunday

Max Strus scored 14 points on 4-for-7 shooting with four rebounds and two assists in 17 minutes during Sunday's 118-72 preseason victory over Cleveland.

Strus is an undrafted rookie out of DePaul who signed a two-way contract with the Celtics in late June. Strus will more than likely spend all his time in the G League this season and is not worth drafting by fantasy owners.