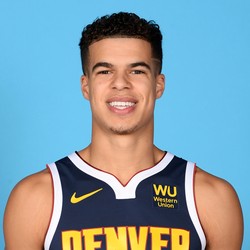 Michael Porter, Jr. fails to score in 12 minutes on Monday

Michael Porter, Jr. was held scoreless on Monday night, playing 12 minutes off the bench and missing both of his field goal attempts (0-2 FG, 0-1 3PT). The rookie "added" one rebound and didn't register any other statistics in a 109-95 Nuggets' victory over the Milwaukee Bucks.

Another game, same story for MPJ. Without consistent playing time or a sizable role on a deep and talented Nuggets team, the rookie simply does not have a clear path to fantasy value for the remainder of this season. Porter, Jr. should be dropped in all re-draft formats at this point but remains a priority stash in dynasty/keeper leagues.