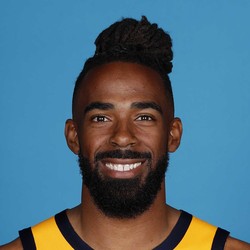 Utah PG Mike Conley expects to leave the bubble in late August for the birth of his third child.

“I’m gonna be in a bubble, but yet if I leave to go see my baby born, I’m gonna be quarantined on the way back in, and possibly have to miss a game or whatever the situation is that we’ll currently be in,” said Conley. “There’s just a lot of things that go into play.” Conley went on to say how supportive of his basketball career his wife is, and that both are confident in the set-up and the ability to leave and re-enter the bubble for a beautiful life moment such as the birth of a child. Other players such as Gordon Hayward have also expressed their desires to exit the bubble at some point during the playoffs due to the birth of a child. Conley has averaged just 13.8 points and 4.3 assists in 29 minutes per game this season, the least amount of points he’s averaged since the 2011 season with the Grizzlies. Utah finds themselves in the 4th-seed of the Western Conference standings at the moment, and will likely finish somewhere between 3-6 in the standings heading into the playoffs.