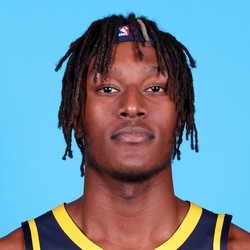 Turner struggled from the field (shooting 30 percent) in Sunday's blowout loss, but managed to salvage some of his fantasy night by logging three steals. The 23-year old has now scored single digits in back-to-back games. He is an elite source in blocks, but fantasy owners were counting on more this year when drafting Turner in top-50 in drafts. Domantas Sabonis career-year is on one of the main reasons for Turner's decline in production this season. He will look to turn things around in Tuesday's tilt against the Hornets.