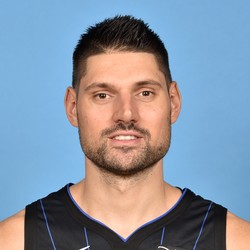 Nikola Vucevic scored 17 points on 8-for-15 shooting with 12 rebounds, three assists, and one block in 31 minutes during Wednesday's 130-120 win at Atlanta.

Vucevic now has four straight double-doubles and five in his last six games for the Magic. Overall the veteran center is averaging 19.0 points. 10.9 rebounds and 3.7 assists on the season and should be owned in all fantasy leagues.