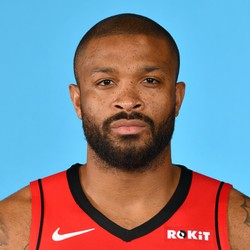 As per usual, Tucker made his presence felt on the glass and on defense while only attempting two shots on Tuesday. The 6'5" center is mainly used as a floor spacer on offense and has the ability to knock down corner three's if left open but is too inconsistent for fantasy consideration. However, if your team is lacking rebounds or defensive stats, Tucker would be a serviceable option. The nine-year pro will have his hands full on Thursday against the Lakers supersized roster.