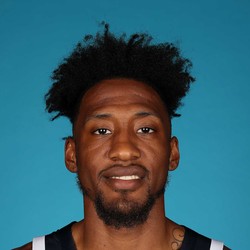 Robert Covington scores 10 points in win over his former team

Covington wasn't needed much offensively as Russell Westbrook and James Harden combined for over half of the Rockets total points on the night. Still, the seven-year pro made his presence felt on the glass and by competing on defense. His scoring will come and go in this Rockets system, but Covington has proved to be a consistent source of rebounds and defensive stats while possessing the potential to catch fire from the beyond the arc on any given night. Covington and the Rockets will have their hands full in Thursday's tilt against the Lakers.