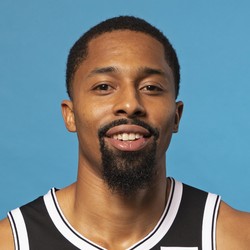 Dinwiddie came off the bench in favor of Garrett Temple in this one, though he still logged a healthy 37 minutes in the overtime victory. It seems the move to the second unit was merely a formality, as Dinwiddie should continue to be a key part of Brooklyn's rotation. Fantasy owners shouldn't be scared off here, particularly as Garrett Temple failed to impress in his starting role.