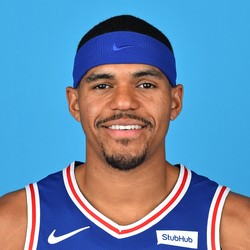 Tobias Harris addressed his taking on an active role in organizing Zoom calls, group texts, saying, “I looked at it like, if we’re being honest, we didn’t have the best chemistry through the year with everything going on. Just use the time to build on that and grow together through the whole pandemic.”

Harris’ facilitation of virtual team engagements should bode well for the Sixers as they prepare for the continuation of the season. His identification of compromised team chemistry provided him an opportunity to not only support the team but position himself as a leader on a squad looking to establish a more cohesive identity. Since joining the Sixers, Harris has been a significant source of production. This year he has played in 65 contests and has averaged 19.4 points, 6.8 rebounds, 3.2 assists, .8 steals, and .5 blocks. The camaraderie he was able to establish during these unprecedented times should help with the transition and preparation of the team while in the bubble, but more importantly, solidify the trust he has built with his teammates. His leadership off the court could open more in-game opportunities for Harris to help facilitate while on the floor leading to a higher level of production for the eight-year pro. His high-floor and high-ceiling make him a solid fantasy play in all formats.