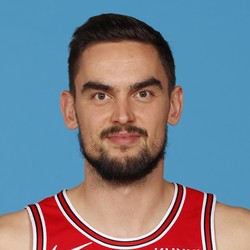 After starting 64 straight games this season, Satoransky's streak came to an end on Tuesday night. Bulls' coach Jim Boylen had no choice but to vault the explosive rookie Coby White into the starting lineup due to his recent play. Satoransky is averaging 28.9 minutes per game and logged 29 off the bench on Tuesday but failed to do much as a scorer. Luckily he was able to salvage his poor night shooting by tying his season-high in rebounds and dishing five assists. Even though Satoransky is no longer the starting point guard, he should continue to see valuable minutes and maintain his value as a pass-first guard in all fantasy leagues.