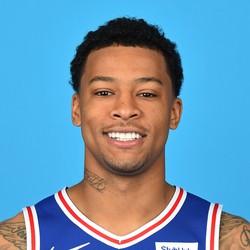 Trey Burke to be released by the 76ers

Trey Burke will be waived by the 76ers.

In order to make roster space for newly acquired Glenn Robinson and Alec Burks, the 76ers will waive Burke. The 27-year old guard was averaging 5.9 points, 1.4 rebounds, 2.1 assists and 0.6 triples across 25 games this season. Burke will look to latch onto another NBA team, but fantasy owners can leave him on the waiver wire in all league formats.