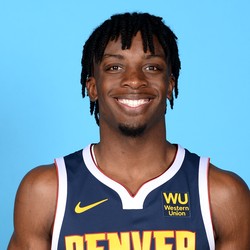 Tyler Cook signed a replacement two-way contract with the Nuggets, after appearing in only 11 games with the Cleveland Cavaliers this season.

After being released by the Nuggets in October of last year, Cook found himself in familiar territory as he inked his new replacement two-way contract with the organization for the remainder of the 2019-20 season. His familiarity with the team played a significant role in landing him the opportunity, as the Nuggets wanted to take players, they could trust into the “bubble.” In his stint with the Cavaliers this season, he appeared in only 11 games and averaged 1.7 points, .9 rebounds, .1 assists, and 3.2 minutes of playing time per game. Although his professional contribution was below minimal, his performance in the G-League was more substantial. Cook played in 29 games with Oklahoma City Blue and averaged 12.9 points, 5.7 rebounds, and 1.2 assists per game. There does not seem to be any clear pathway for Cook to see purposeful playing time in the Nuggets’ rotation, thus making him an easy fade for fantasy purposes.