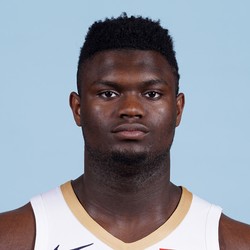 Zion Williams was selected as the second cover athlete for 2K Sport’s NBA 2K21. Williams will be joining Damian Lillard as the latest featured cover athlete of the franchise, and the third player from the New Orleans organization to grace the cover after Chris Paul and Anthony Davis.

In speaking on how he felt about the selection, Williamson said, “It’s one of those emotions I’m still processing…it’s a dream come true. At those AAU tournaments, you’re looking at the cover thinking, ‘That’s gonna be me.’ For it to happen that fast, it’s a huge honor.” The rookie star has only played 19 games for the Pelicans this year but has made his presence known immediately. On the season, he has averaged 29.7 minutes of playing time, 23.6 points, 6.8 rebounds, and 2.2 assists per game. Zion will look to continue his excellent play in Orlando and should remain a must-start in all fantasy formats at this time.