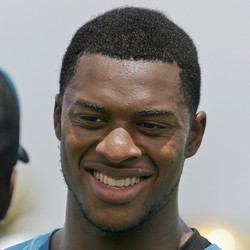 Allen Robinson corralled nine of 12 targets for 71 yards in the Bears’ 21-19 win over the Vikings on Sunday.

A-Rob paced Chicago in receiving yards and targets once again, finishing the season strong despite failing to score. It was a successful season for Robinson by all accounts, as he produced a 98/1,147/7 receiving line -- his first thousand-yard campaign since 2015 and the most single-season receptions of his career.

Allen Robinson managed six receptions for 53 yards on 12 targets in the Bears’ 26-3 loss to the Chiefs on Sunday.

Robinson led the way for Chicago again, finishing with the team lead in targets, receptions and receiving yards on SNF. It was a disappointing stat line for fantasy championship week, but Robinson's continued role as the clear-cut No. 1 for Mitch Trubisky remains encouraging. He'll look to bounce back against Minnesota in Week 17.

Allen Robinson brought in seven of 14 targets for 125 yards in the Bears’ 21-13 loss to the Packers on Sunday.

A-Rob's three-game scoring streak was snapped Sunday, though he still led the Bears in receiving and has gone for 100 yards or a score in four straight. With Mitch Trubisky finally able to move the ball downfield, Robinson has benefited tremendously, and he'll look to keep the momentum going against the Chiefs in Week 16.

Allen Robinson brought in five of eight targets for 48 yards and two TDs in the Bears’ 31-24 win over the Cowboys on Thursday.

A-Rob was at it again, finding the end zone twice in Thursday's important victory. He's now scored four times in his last three games, bringing his season total to seven touchdowns -- his highest total since 2015 when he was with the Jaguars. Fantasy owners have got to keep rolling with him as a WR2 for Weeks 15 and 16 against Green Bay and Kansas City.

Allen Robinson caught eight of 12 targets for 86 yards and a TD in the Bears’ 24-20 win over the Lions on Thanksgiving.

Robinson has now scored in back-to-back games for the second time this season. He's accounted for 217 yards over his last two outings and remains a WR2/3 moving forward. He'll try to extend his scoring streak next week against Dallas.

Deposit $10 at a DFS partner site you have NOT played at and get a FREE 6 Month HOF Subscription!
Claim Offer
Who Should I Start?
Most Accurate Experts
for Allen Robinson
Consensus Rankings
View All Rankings