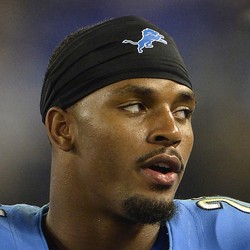 RB Ameer Abdullah re-signs with Minnesota on a one-year deal.

Abdullah will return to Minnesota for a third season. He’s been the primary kick returner and the 3rd or 4th RB on the depth chart for the Vikings the past two seasons. He’ll most likely compete with Mike Boone for the 3rd-string RB position behind Dalvin Cook and Alexander Mattison. Even if he beats out Boone for a spot behind Cook and Mattison, Abdullah likely doesn’t have any fantasy value unless either of the first two guys goes down with an injury.

Ameer Abdullah carried six times for 22 yards, adding three receptions for 14 yards in the Vikings’ 21-19 loss to the Bears on Sunday.

Abdullah played backup to Mike Boone, finishing with nine total touches in change-of-pace duty. His role will be minimized significantly once Dalvin Cook or Alexander Mattison get back on the field.

Ameer Abdullah rushed four times for 27 yards, adding six receptions for 31 yards in the Vikings’ 23-10 loss to the Packers on Monday.

Surprisingly, it was Abdullah who played like the best back Monday, as Mike Boone did next-to-nothing on 12 touches. Abdullah should retain some change-of-pace and passing-downs work while Dalvin Cook and Alexander Mattison are sidelined, though he'll hit the bench once one or both get healthy.

Ameer Abdullah carried five times for 25 yards in the Vikings’ 39-10 victory over the Chargers on Sunday.

Abdullah finished second in carries behind Mike Boone (13) after Dalvin Cook (shoulder) left the game, so he should be considered the favorite for mop-up duty if Boone is the top option in Week 16. Even in that case, Abdullah doesn't need to be picked up off waivers.

Ameer Abdullah rushed once for five yards, adding two receptions for 11 yards in the Vikings’ 27-23 comeback win over the Broncos on Sunday.

Abdullah did his part in Sunday's win, chipping in three touches as a change-of-pace for Dalvin Cook. He's still behind Cook and Alexander Mattison and doesn't warrant fantasy consideration at this time.

Deposit $10 at a DFS partner site you have NOT played at and get a FREE 6 Month HOF Subscription!
Claim Offer
Who Should I Start?
Most Accurate Experts
for Ameer Abdullah
Consensus Rankings
View All Rankings