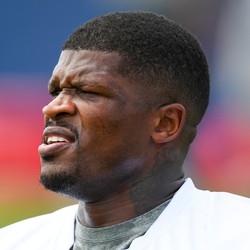 The Houston Texans are signing wide receiver Andre Johnson to a one-day contract so he can officially retire as a member of the Texans.

Johnson announced his retirement from the NFL last October, but will officially retire as a member of the Texans this offseason -- he spent the first 12 years of his 14-year career with Houston and owns nearly every one of the franchise's receiving records. Johnson will be eligible for the Pro Football Hall of Fame in five years.

Andre Johnson caught two of four passes for 13 yards and a touchdown in Week 5 against the Dolphins.

Johnson has yet to go over 33 yards receiving in any game this season, but has scored two touchdowns in five games. Generally, the Titans rely heavily on their running game, and their pass catchers, other than Delanie Walker, won't provide much value. Johnson remains irrelevant other than in the deepest of leagues.

Tennessee Titans WR Andre Johnson caught only one pass on the day, but he made it count with a game-winning nine-yard TD reception with 1:13 left in the fourth quarter.

While Johnson will be a future Hall-of-Famer and was at one time a fantasy stud, his days of fantasy relevance are over. Johnson cannot be counted on, on a weekly basis and shouldnâ€™t be rostered, even in deeper leagues.

Andre Johnson caught three passes for 65 yards in the pre-season win over the Raiders.

Johnson got some run with the first-team offense and got four targets. He may have a tiny role this year, but Sharpe, Wright and Matthews are the Titan WRs you want.