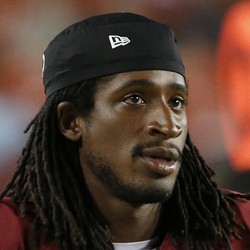 Andre Roberts caught three of his four targets for 28 yards in the Jets' Week 17 loss to the Patriots.

Roberts has been a role player at best throughout 2018, and as a pending free agent, isn't likely to draw significant interest. Expect more of the same in 2019, so Roberts will likely not be on the fantasy radar in the summer and fall.

Andre Roberts caught three of his four targets for 16 yards and a touchdown in the Jets' Week 15 loss to the Texans.

Roberts has a decent looking fantasy line thanks to the touchdown, but four targets and 16 yards is not adequate for fantasy purposes. Don't try to talk yourself into Roberts for next week's matchup with the Packers, especially with Quincy Enunwa potentially returning to action.

Andre Roberts caught two of his six targets for 21 yards in the Jets' Week 7 loss to the Vikings.

Roberts stepped into a decent role with Quincy Enunwa out, seeing the targets that many had pegged for Jermaine Kearse. If Enunwa continues to miss time and Roberts continues to see starter usage, he might be worth an add, but otherwise he can be left on waivers.

After only one sub-par season with Detriot, Roberts signed with Atlanta Monday. Playing in all 16 games in 2016, he produced a 14-188-1 stat line and averaged 13.4 YPC in the underwhelming effort. Roberts, who is a seven-year veteran, will attempt to rejuvenate his stalling career with the Falcons next season. He'll likely replace Aldrick Robinson -- who signed with the 49ers last week -- and take over his role as the No. 4 wideout on the depth chart behind Julio Jones, Mohamed Sanu and Taylor Gabriel.

Although Roberts sported a red noncontact jersey on Wednesday, his status for this weekend really isn't in doubt as the Lions have protected him in practice the last couple weeks and he's appeared in games nonetheless. With the presence of TJ Jones on the active roster and Roberts' limited involvement in the passing game he really isn't much of an asset for DFS this weekend, even given the limited player pool.