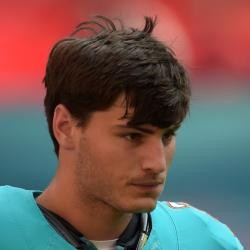 Andrew Franks made all of his extra point attempts (4) on Thursday. Franks did miss his only field goal attempt just beyond the 40 yard line.

Franks has been solid this preseason. He has gotten a solid amount of opportunities and should translate it into points for fantasy owners throughout the season. The Dolphins offense is high powered and Franks should be on your team if you don't have a top three kicker.

Andrew Franks had a great game on Thursday night. Franks was 4-for-4 on extra point attempts and was 1-for-1 on field goal attempts, which was a 56 yard attempt.

Franks is having a solid preseason. With the high powered offense Miami has, Franks will have tons of opportunity to score points. Grab him if you're able to.

Andrew Franks had a quiet night on Thursday. Franks attempted just one XP and connected. He did not attempt any field goals.

Franks is a steady kicker. He will get plenty of opportunities to kick for a high powered Dolphins offense.

Andrew Franks had a good day on the field on Thursday. Franks was 1-for-1 in the field goal department and 2-for-2 on extra points. Franks' field goal was from 36 yards out.

Franks is a solid kicker. He is a kicker that isn't at the top of the list, but with Miami's offense, Franks will get opportunities to put up points.

Andrew Franks scored six points on the day, converting two field goal attempts. The Dolphins reached the end zone once, but went for two. Turnovers hampered the Dolphins' attempt to overtake the Steelers and ended the day with a 30-12 loss.

Franks hasn't been a top fantasy option all season. He's had few scoring opportunities and ranks at the bottom in attempts. The Dolphins averaged only 22.7 points per game through Week 16. Franks finishes the season completing 16-of-21 field goals (76%), his longest kick from 55 yards.