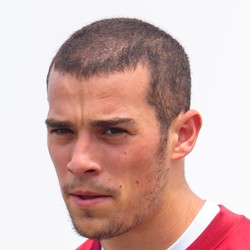 "We liked a lot of the receivers in the draft," Kingsbury said, "but we also like the guys we took last year." The Cardinals passed on receivers in the 2020 NFL Draft as the team is confident with Andy Isabella, Hakeem Butler, and KeeSean Johnson. "Hopefully things go as planned," Isabella said. "We get a shot on the field, we start making plays and things start to take off." Isabella hopes to find a bigger role in 2020, but will likely be fourth on the depth chart behind DeAndre Hopkins, Christian Kirk, and Larry Fitzgerald. The Cardinals' 2019 receiver class will try to carve out a role in an offense that employs four-receiver sets.

Andy Isabella hauled in three passes for 78 yards in the Cardinals' 30-27 Week 10 loss to the Bucs.

Andy Isabella caught his lone target for an 88-yard touchdown in the Cardinals' Week 9 loss to the 49ers.

Isabella is a talented player who has failed to see the field much this season. Perhaps this highlight-reel play will get him more involved down the stretch. For now, however, he remains a dynasty league asset and nothing more.

Isabella hauled in both of his Week 7 targets for eight receiving yards. It was a quiet afternoon for the entire Cardinals offense as no player received more than four targets during the Chase Edmonds show. Isabella played only 10 snaps, but notably saw more than fellow rookie KeeSean Johnson who had played ahead of him all year. Isabella remains a hold in dynasty leagues, and may be worth a specualtive end of the bench stash in deeper redraft formats.

The 22-year-old had four targets. Isabella reportedly remains "a work in progress" and is unlikely to have much re-draft value to begin the 2019 season.

Brendan Tuma - Too Much Tuma45 weeks ago
Who Should I Draft?
Most Accurate Experts
for Wide Receivers
Do Not Sell
Are you looking to contact Customer Support about a subscription or account related question?
Yes
No, I'm a California resident looking for the California Consumer Privacy Act form