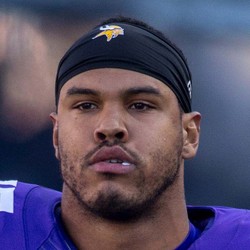 Barr is currently third on the team in total tackles with 65 through Week 13. He should only be played in deeper IDP leagues.

Anthony Barr was tied with Eric Kendricks racking up the most tackles (10) during Sunday’s 38-20 win over the Eagles.

Barr is currently sixth on the team in total tackles (27) through Week 6. He should be left on waivers in most leagues. After Sunday’s performance, he must be kept on the radars of all fantasy owners in need of an LB replacement during Bye Weeks.

Anthony Barr finished Sunday’s win over the Giants with three total tackles and his first interception of the year.

Barr is off to a bit of a slow start this season. He currently has 17 total tackles, one sack, and one interception. He can be left on waivers in most leagues.

Anthony Barr is re-signing with the Vikings on a five-year contract worth $67.5 million.

The deal includes $33 million in guaranteed money. It was reported yesterday that Barr was going to sign with the Jets but he apparently had a change of heart. It's a big blow to the Jets since they were going to use Barr to upgrade their pass rush. The 26-year-old linebacker totaled three sacks in 13 games last year, though Minnesota didn't use him to rush the passer all that much.

Barr has three sacks in his last two games. IDP owners in need of some production at the LB spot should look at Barr as a possible replacement player. He is an LB2 in most cases, but if this trend continues, Barr could help owners win some IDP titles.