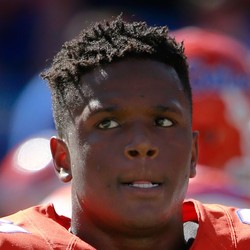 Callaway was waived by the Browns on Thursday with the team citing that he had "too many issues." It was later learned that he tested positive for a banned substance over the summer. His appeal was heard by the NFL on Friday and he is awaiting final word from the league. Callaway has had a multitude of drug-related issues since leaving college, including a positive test at the NFL combine and a four-game suspension to begin the 2019 season.

Callaway was late for Week 10's game against the Buffalo Bills, which resulted in him being a healthy scratch. According to sources, Callaway did not respond well to the benching, which prompted the Browns to release the second-year receiver. Callaway was a fourth-round pick by Cleveland in the 2018 NFL draft. Look for Rashard Higgins to take over as the team's No. 3 wide receiver going forward. Offensive lineman Drew Forbes was activated off of injured reserve to take Callaway's roster spot.

Antonio Callaway was a late scratch prior to Sunday's game against the Bills, and it has been reported that it was due to a disciplinary reason. Head coach Freddie Kitchens hasn't discoled the reason, and it's not clear if Callaway will continue to be held out.

Callaway has had an up-and-down career to this point, as he's shown flashes of his ability but continues to struggle with off-the-field issues. At this point, he's not relevant in redraft leagues, and it's getting difficult to justify using roster space on him in dynasty leagues.

Antonio Callaway is inactive for the Browns' Week 10 game against the Bills.

This is a surprise move, as there was no indication that Callaway would miss the game. It's unclear if the cause is an injury or otherwise but, either way, certainly get Callaway out of your lineups. Rashard Higgins should step in as the WR3 for the Browns.

Cleveland Browns wide receiver Antonio Callaway caught 4-of-5 targets for 56 yards in a 24-19 loss to the Broncos in Week 9.

Callaway easily had his best game of the season. The second-year wideout has struggled with drops over his four games played, which has limited his upside. He will look to stay hot in Week 10 against the Bills.

Matthew Terelle36 weeks ago
Who Should I Draft?
Most Accurate Experts
for Antonio Callaway
Do Not Sell
Are you looking to contact Customer Support about a subscription or account related question?
Yes
No, I'm a California resident looking for the California Consumer Privacy Act form