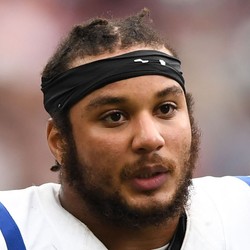 Morrison has been better in the last few weeks, collecting 21 tackles in his last four games. While Morrison is trending in the right direction, there are much better options available on waivers.

After having a rough outing with only one tackle against the Rams in Week 8, Morrison bounced back with his best game of the season against the Patriots. While Morrison had a nice game, he isn't worth a waiver claim.

Morrison, who has been quiet out of the gate, had his best game of the season against the Lions. Morrison currently isn't on the fantasy radar.

Morrison now projects as inside linebacker depth behind Blake Martinez and Oren Burks when Burks returns. Morrison actually led Indy in tackles last season with 108 but won't get as much playing time in Green Bay.

Deposit $10 at a DFS partner site you have NOT played at and get a FREE 6 Month HOF Subscription!
Claim Offer
Most Accurate Experts
for Antonio Morrison
Consensus Rankings
View All Rankings