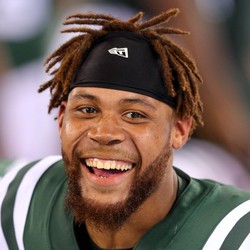 ArDarius Stewart has signed with the Raiders and will be added to their practice squad.

Stewart was a third-round pick by the Jets in 2017, but he was cut ahead of the 2018 season. Despite his solid draft capital, he doesn't have fantasy appeal at this time given the lack of interest he received in only his second season in the league.

ArDarius Stewart caught all four of his targets for 24 yards against the Giants.

Stewart will miss the first two games of the 2018 season with a PED-related suspension, so he's hardly fantasy-relevant. With Quincy Enunwa returning and Terrelle Pryor catching a touchdown pass on Friday, it's nearly impossible to see Stewart making an impact in 2018.

Dan Harris1 year ago
ArDarius Stewart falling out of favor with NYJ coaches?

Sam Neumann of the Jets Wire for USA Today predicts that Chad Hansen would receive snaps over ArDarius Stewart, if either sophomore receiver sees meaningful playing time. Neuman notes that Stewart has shown improvement in camp, but his suspension will hold him back.

Stewart looks to be on the outside looking in at this point. Even on a thin depth chart, it looks like he will be passed up by players who are simply available, like Chad Hansen. Stewart has a nice profile, but was limited to mostly special teams play last year. He's approaching the territory of cut candidates, even in deep dynasty leagues, and he's certainly not on the radar for 2018.

Second-year New York Jets WR ArDarius Stewart is set to be suspended for two games following a positive test for a diuretic or masking agent, which is a violation of the NFL's performance-enhancing drug policy. According to NFL Network's Ian Rapoport, "The suspension has not been announced and a league spokesman had no comment."

Stewart played sparingly for the Jets after being selected in the third round of last year's NFL Draft. He ended his rookie season playing just 231 snaps and accumulated 109 yards of offense on 15 touches. Stewart was already facing a difficult time competing for snaps in a wide-open Jets' receiving corps, but a potential two-game absence to open the season certainly won't help. His dynasty value is fringing on non-existent in all but the deepest of leagues.

ArDarius Stewart caught one of two targets for 46 yards in the Jets’ Week 17 loss to the New England Patriots.

After a promising start to the year, Stewart had a season to forget in 2017. The third-round rookie out of Alabama saw his role on offense slowly diminish as the season progressed and was eventually outshined by fellow rookie receiver Chad Hansen. Stewart clearly has his work cut out for him if he wants to see more snaps in his sophomore campaign.