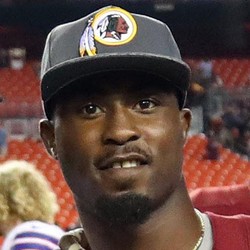 Bashaud Breeland recorded one solo tackle, a fumble recovery and returned an interception for a touchdown in the Packers' win over the Atlanta Falcons.

While Breeland has had limited action this season, playing just four games, he has posted respectable results when he is on the field with two interceptions and 14 total tackles. The 2014 fourth-rounder is worth keeping an eye on going into the final weeks of the season.

Breeland impressed in his first game action of the year, being one of four cornerbacks to each eight tackles in Week 9. While Breeland isn't worth a waiver claim as there are better options available, he is worth keeping an eye on as it was his first game of the year.

Caleb Baggette1 year ago
Bashaud Breeland works out for Patriots

Free agent cornerback Bashuad Breeland worked out for the New England Patriots. Breeland signed a three-year $24 million contract with Carolina back in March but failed a physical, making him a free agent. Breeland has also previously visited the Browns, Ravens, Raiders, Chiefs, and Colts this offseason.

Breeland, 26, was a 2014 fourth-round selection by Washington, where he played his first four NFL seasons. He's been solid in coverage and is undoubtedly looking to get somewhere near the money that he originally was offered from the Panthers. This may keep him from signing for a while, but he'll eventually sign and compete for a starting or nickel spot. Perhaps he'll end up signing a one-year "prove it" deal when a team's secondary is hit by injuries.

Bashaud Breeland will reportedly sign with the Carolina Panthers once teams are officially allowed to sign players. The deal according to Mike Garofolo is 3-years, $24M with $11M in guarantees.

The cornerback allowed a 76.1% passer rating and 47.8% completion rate while in coverage for the Washington Redskins in 2017. The 26-year-old grew up in South Carolina and will now play just a few hours away from his hometown of Allendale.

Bashaud Breeland suffered a high right ankle sprain in the Redskins win over the Giants. Breeland is looking at a multiple week absence. Rookie CB Kendall Fuller will slide in alongside CB Josh Norman and CB Dashaun Phillips.

The Redskins also lost FS Deangelo Hall to a season-ending injury. Avoid the Redskins DST as a streaming consideration.