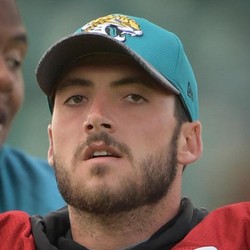 Brandon Allen completed 10-of-25 passes for 82 yards with one interception in the Broncos' 20-3 loss to the Bills Sunday. He added two rushes for eight yards.

Allen was absolutely horrible Sunday and it wouldn't be at all surprising to see Denver turn to Drew Lock for next week's game against the Chargers.

Brandon Allen completed 17-of-39 passes for 240 yards with one touchdown and one interception in the Broncos' 27-23 loss to the Vikings Sunday. He added three rushes for 18 yards.

Allen had a mediocre fantasy day filling in for the injured Joe Flacco (neck) Sunday. He managed just one touchdown pass against Minnesota and completed less than half of his passes.

Brandon Allen completed 12-of-20 passes for 193 yards and two touchdowns in the Broncos' 24-19 win over the Browns Sunday. He added five rushes for 13 yards.

Allen played well in his first NFL start and put up a pair of touchdown passes to reward owners forced to use him in a pinch this week. His mobility offers some fantasy upside, but rookie Drew Lock is likely to start following Denver's bye.

Brandon Allen was named the starting quarterback for Sunday’s game against the Browns.

With Joe Flacco placed on the injured reserve, Allen will get first crack under center. Allen, a former sixth round pick, will see his first NFL action in Sunday’s Week 9 contest against the Browns. With Drew Lock targeting a return from the IR following the Broncos’ Week 10 bye, Allen may not be guaranteed more starts after this week. Allen can be picked up in two quarterback and super flex leagues as a streamer.

Quarterback Brandon Allen was cut by the Los Angeles Rams on Saturday but was claimed by the Denver Broncos to be the backup to Joe Flacco On Sunday.

With Drew Lock going on injured reserve and Kevin Hogan being waived, the Broncos were in need of a backup to starter Joe Flacco. Brandon Allen steps in as the immediate backup to Flacco and, barring any other moves, is one injury away from seeing meaningful snaps in Denver.