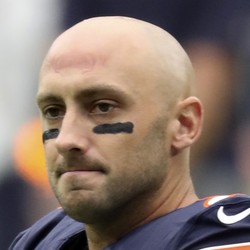 Brian Hoyer and the Patriots have reached an agreement on a one-year, $1.05 million contract. He will receive $2 million guaranteed from the Colts and Patriots.

Hoyer will join the Patriots for the third time in his career, and give the team a quarterback who is familiar with New England’s offense. He threw for 372 yards with four touchdowns and four interceptions across four games with the Colts in 2019. Hoyer will compete with Jarrett Stidham and Cody Kessler for the Patriots’ starting quarterback job. Whichever player emerges as the starter is a borderline QB2, and is mainly an option in super-flex and two-quarterback league formats.

Brad Camara2 weeks ago
Brian Hoyer being released by the Colts

As expected, Hoyer was released by Indianapolis on Saturday. The Colts recently signed Phillip Rivers to be the team's starting quarterback, and ultimately decided to move on from Hoyer. The 34-year-old threw for 372 yards with four touchdowns and four interceptions across four games in 2019. The veteran QB will look to latch onto another team.

Brian Hoyer completed 18-of-39 passes for 204 yards, one touchdown and three interceptions in the Colts’ 16-12, Week 10 loss to the Dolphins.

Hoyer did not look good on Sunday as the got the start against the struggling Dolphins with Jacoby Brissett sidelined with a knee injury. If Brissett is healthy enough in Week 11 look for Hoyer to find a seat back on the bench and if he does end up playing he should be left on the waiver wire.

Brian Hoyer will start Sunday’s game against the Dolphins after Jacoby Brissett (knee) was downgraded to out.

Brissett practiced on a limited basis this week, but was ultimately ruled out for Sunday’s matchup against the Dolphins. He should be primed for a solid matchup against a beatable Miami secondary. Hoyer can be used as a streamer and is a borderline QB2 in Week 10.

Brian Hoyer went 17-for-26 for 168 yards with three touchdowns and one interception on Sunday as the Colts lost to the Steelers by a 26-24 score.

Hoyer came on in relief of starter Jacoby Brissett and played solid almost leading the Colts to a comeback win. It looks like Brissett is dealing with an MCL issue which could mean Hoyer will get the start in Week 10 against the Dolphins. Fantasy owners should keep an eye on updates.