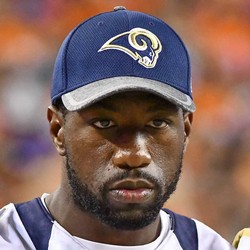 Brian Quick caught both of his targets for 12 yards Sunday against the Panthers.

Quick now has three receptions in the last two games after being catchless to open the season. He's seeing more time due to injuries to Redskins' WRs, and he's still not fantasy relevant at the position.

Wide receiver Brian Quick has re-signed with the Washington Redskins, the team announced on Tuesday.

Quick was with Washington in 2017 and in the preseason but was released shortly before the season. Even with Washington a bit banged up at the wide receiver position, Quick does not have any immediate fantasy value.

With Jordan Reed and Jamison Crowder inactive on the day, Brian Quick made the most of his opportunities catching three balls for 49 yards.

Quick isn't presently on the fantasy radar but is worth monitoring in dynasty leagues.

NFL Network's Ian Rapoport is reporting free agent wide receiver Brian Quick and the Washington Redskins have agreed to terms on an undisclosed deal on Friday.

Quick is coming off of a 2016 season in which he appeared in 16 games and accumulated 41 receptions for 564 yards and three touchdowns with a 13.8 YPC average. He is expected to enter 2017 as the No. 4 receiver on Washington's depth chart with Terrelle Pryor, Jamison Crowder and Josh Doctson slated ahead of him.

Brian Quick hauled in two of his four targets for 16 yards on Sunday against the Jets.

After a few big games early in the season, Quick has largely been held in check by opposing defenses. At this point, Kenny Britt is the only semi-reliable wide receiver on the Rams.

Dan Harris4 years ago
Most Accurate Experts
for Wide Receivers
Do Not Sell
Are you looking to contact Customer Support about a subscription or account related question?
Yes
No, I'm a California resident looking for the California Consumer Privacy Act form