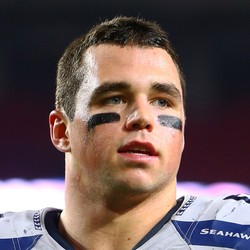 49ers' LB Brock Coyle suffered a compression fracture to his T4 vertebra, and will need at least six weeks in recovery.

Coyle wasn't great in his Week 1 debut against the Vikings, but he was headed back to the bench in Week 3 at the latest anyway once 49ers' LB Reuben Foster returns from suspension. Coyle played well last year when 49ers' LB Malcolm Smith tore his pectoral muscle before the season began, and it's unfortunate he likely won't get the chance to bounce back in 2018.

Coyle was horrible in coverage, and repeatedly abused by Minnesota RB Dalvin Cook. Coyle dropped an interception and missed multiple tackles, then got turned around for no reason during a Minnesota QB Kirk Cousins slow-developing scramble for a first down. Then he got injured. Is Reuben Foster back yet? I'd even take Malcolm Smith at this point.

Undrafted Free Agent LB Brock Coyle continued his impressive pre-season with an 8 tackle game against the Chargers. When asked about Coyle, Head Coach Pete Carroll stated â€œIâ€™m not worried about (starting Coyle) one bit, if he had to play, he could play. Itâ€™s not even a big deal to us right now. Heâ€™s done it, so heâ€™s kind of gotten through that.â€

Coyle is receiving an unexpected bounty of playing time in the wake of Bobby Wagner's hamstring injury. Coyle is an athletic specimen, measuring in at 6'1, 243, and possessing 4.6 speed and a 37 inch vertical, he was also a national-class skier until devoting himself to football full time. If Wagner misses any regular season games, and Coyle finds himself in a three-down MLB role, he could deliver sneaky fantasy value.

As deep and versatile as the Seahawks LB corp is, there seems to be a roster spot available for a bonafied Mike linebacker to back up budding star Bobby Wagner.

Considering the value of the starting middle linebacker in a defense as good as Seattle's, Coyle is a player that needs to at least be on IDP owner's radars. Starter Bobby Wagner is a near consensus top 10 IDP player and if he were to miss any time, Coyle is the player that might end up next in line. His status is worth keeping an eye on as we progress through the preseason. If he continues to impress and makes the team, Wagner owners and dynasty IDP players should defnitely take note.

Michael White6 years ago
Most Accurate Experts
for Linebackers
Do Not Sell
Are you looking to contact Customer Support about a subscription or account related question?
Yes
No, I'm a California resident looking for the California Consumer Privacy Act form