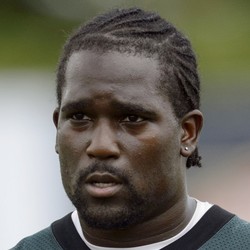 Bryce Brown is expected to play his usual change of pace role in Sunday's Wild Card round matchup in Minnesota.

Although Christine Michael rushed for over 100 yards in the regular season finale, Bryce Brown found the end zone in that matchup. Brown is a touchdown or bust DFS play against Minnesota's stout defense on Sunday.

Seattle Seahawks running back Bryce Brown plunged in a one yard run Sunday as the Seahawks beat the Arizona Cardinals 36-6. The goal line carry followed a 45 yard carry from Christine Michael, and was Brown's only significant contribution on offense.

Bryce Brown has always had electric speed, but he appears to be working in a change of pace capacity to Christine Michael. Michael had nearly twice as many touches, and was far more effective with them. It will be interesting to see what happens when Marshawn Lynch returns to the lineup, Seattle doesn't usually carry 4 running backs and Fred Jackson has secured his spot in the rotation.

He rushed seven times for nine yards, and he failed to catch his lone target. Brown was following Christine Michael but actually out-touched him 7-6. Neither was impressive in the contest.

Brown and the Seahawks face the Cardinals next week and owners need to look elsewhere if they are thinking of starting him.

Brown saw nine carries and 43 yards on the ground, as well as one target in the air, and was effective when given an opportunity. His touches, however, were overshadowed by Christine Michael's strong performance.

Brown appeared to be the leading candidate to take over for Thomas Rawls, but the late-week signing of Michael threw things into flux. While both runners, as well as potentially Derrick Coleman, who technically started the game, will likely see touches, there is no indication that any one player will emerge to take control of the backfield. As a result, each player may have their value limited.

On Friday Seahawks head coach Pete Carroll said, â€œRunning back situation, youâ€™ll find out at game time how weâ€™re going to do it. Guys really, really practiced hard this week and they know that theyâ€™re competing for their playing time. Itâ€™s going to be fun to see how they do.â€

Until this situation is played out on the field, it would be a good idea to avoid starting any of the Seahawks running backs in week 15. Seattle faces a nice matchup against Cleveland but there are just too many question marks right now. If you have the roster space, Bryce Brown and Christine Michael should be owned.

Steven Grossi5 years ago
Most Accurate Experts
for Running Backs
Do Not Sell
Are you looking to contact Customer Support about a subscription or account related question?
Yes
No, I'm a California resident looking for the California Consumer Privacy Act form