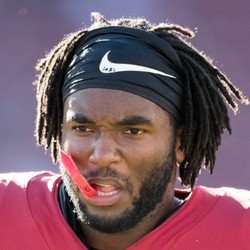 Bryce Love (ACL) needs to undergo yet another surgery on his injured right knee.

The fourth-round rookie was once a legit running back prospect but has been slowed by his ACL injury this year. This was always going to be a "redshirt" year for him, however. It remains to be seen when he'll start practicing.

Bryce Love (knee) is aiming to return in the middle of training camp.

Love tore his ACL last season and there were reports leading up to the draft that NFL teams were worried about stiffness in his knee. That didn't stop Washington from using a fourth-round pick on the 21-year-old. Compared to other reports this timetable sounds optimistic. We don't have a ton of hope for him being fantasy relevant to begin his pro career. The Redskins also have Adrian Peterson, Derrius Guice, Chris Thompson, and Samaje Perine on the roster.

Brendan Tuma - Too Much Tuma39 weeks ago
Bryce Love goes to Redskins at No. 112

With the 112th pick in the 2019 NFL Draft, the Washington Redskins selected Stanford running back Bryce Love.

Love fell on a lot of draft boards because of an ACL injury and a lackluster 2018 season, but he had an excellent 2017 and was on track to be a first or second-day pick at the time. He will join a crowded running back room in Washington with Adrian Peterson, last year's second-round pick Derrius Guice (who missed most of last season with an ACL injury of his own, and pass-catching back Chris Thompson.

Love tore his ACL back on December 1st and is reportedly dealing with stiffness in his knee. Pelissero adds that teams are questioning if he'll regain his explosiveness, which has his draft stock plummeting at the moment.

Brendan Tuma - Too Much Tuma40 weeks ago