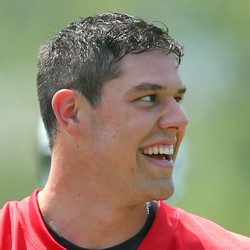 Former New York Jets quarterback Bryce Petty has been claimed off waivers by the Miami Dolphins, according to NFL insider Field Yates on Twitter. Petty had been released by the Jets earlier in the week.

The Jets decided to cut Petty just a few days after drafting Sam Darnold third overall in the NFL draft, but Miami is actually a pretty good landing spot for the third-year quarterback. While Ryan Tannehill is the starter for the Dolphins, he is recovering from knee injuries that cost him the end of the 2016 season and the entire 2017 season. And the only other competition for Petty is journeyman quarterback Brock Osweiler and David Fales, who has attempted just 48 passes in his four-year career. Petty could easily win the backup job and play his way onto the field if Tannehill is injured again or struggles.

The Jets are cutting Bryce Petty, according to Brian Costello of the New York Post.

This is hardly a surprise after the Jets signed both Josh McCown and Teddy Bridgewater, and then drafted Sam Darnold. Petty has an incredibly underwhelming 4:10 TD:INT ratio in his career, but he has enough potential to likely land as a backup somewhere in the NFL.

Bryce Petty completed 19 of his 36 passes for 232 yards, while throwing no touchdowns or interceptions in the Jets' Week 17 loss to the Patriots.

Petty finally had a 200-yard game this season, and it happened to be on the season finale. It's doubtful that he'll be the starting quarterback next season for the Jets, so don't bother with him in fantasy formats.

Bryce Petty completed 14 of his 27 passes for 114 yards and an interception in the Jets' Week 16 loss to the Chargers.

Bryce Petty is not worth a spot on your fantasy roster as he has not passed the 200-yard mark in both starts.

Bryce Petty completed 19 of his 39 passes, and threw for 179 yards, one touchdown, and two interceptions in the Jets' Week 15 loss to the Saints.

Bryce Petty did not do disastrous as people thought, but he still showed why he is a backup quarterback. Petty should not be owned on any of your teams unless you are in a deep two-quarterback league.