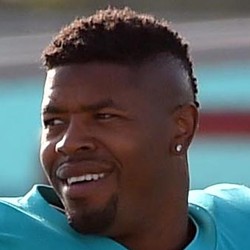 Despite reports to the contrary, 38-year old veteran LB Cameron Wake will not retire after being released by the Titans last month.

“It’s simply not true,” said Wake’s agent Paul Sherry of ProStar Sports. Wake and his representation are currently engaged in talks with multiple teams for the upcoming season. Dolphins fans would surely welcome back the fan favorite if Miami were to give him a shot.

Cameron Wake (knee) is active for the Dolphins' Week 7 game against the Lions.

Wake missed the last two games after undergoing arthroscopic knee surgery, but is ready to go today. It's unlikely that he'll see a full complement of snaps, but his presence should at least have a minor impact on Matthew Stafford and the Lions' passing game.

Wake has missed the last two games after undergoing arthroscopic knee surgery. It’s not yet known if he will play Sunday, but the return to practice is an encouraging step. Wake has one sack in four games played this season.

The Miami Dolphins and pass rusher Cameron Wake agreed to terms on a two-year, $19 million contract extension that includes $11 million in guaranteed money.

Wake was awarded a contract extension Saturday that ties him to the Dolphins through 2019. Despite his age, the 35-year-old pass rusher is coming off of one of his best seasons as a pro in 2016. Playing in all 16 games, he accumulated 29 total sacks, 11.5 sacks, an interception and five forced fumbles. He'll likely wrap up his career in Miami.

Tom Brady and the Patriots offense moved the ball at will against Cameron Wake and his teammates on Sunday. Wake had one tackle on the day, ending his three-week sack streak.

Wake ends the regular season with 11.5 sacks. The Dolphins did not sack Tom Brady, nor did Brady throw an interception on Sunday.