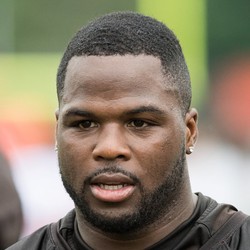 Carlos Hyde rushed for 44 yards on 13 carries while securing three catches for an additional 18 yards on four targets Sunday in the Texans’ Divisional Round loss to the Chiefs by a 51-31 score.

Hyde had a strong first half on Sunday but the Texans had to abandon the run game in the second half after the Chiefs built a big lead. The veteran running back will be a free agent in the offseason and there's a good chance he will be back with the Texans.

In his first career playoff game Carlos Hyde had a game-high 16 carries but averaged only 3.0 ypc for a total of 48 yards. His most notable contribution to the game was a walk-in five-yard touchdown pass to take a 19-16 lead late in the fourth quarter.

The Texans continued to stick with Hyde and the running game even though they were trailing 16-0 in the second half. That type of commitment is a positive for Carlos Hyde as the Texans travel to Kansas City for the Divisional Round of the playoffs. Fellow running back Duke Johnson had three rushing attempts and three receptions in the contest.

Carlos Hyde rushed 16 times for 48 yards in the Titans' Wild Card win over the Bills, adding a five-yard touchdown catch on his only target.

After only four carries in his last game of the regular season, Hyde resumes his role as the Texans' lead back in Saturday's wild-card game win. Hyde will have a tough matchup in the Divisional Round when the team will be facing the Chiefs or the Ravens.

Carlos Hyde rushed four times for 13 yards in Houston's Week 17 loss to the Titans by a 35-14 score.

With the Texans having nothing to play for on Sunday with their playoff matchup already decided they gave their star running back a break on Sunday. Expect Hyde to see a full workload in the Wild Card matchup against Buffalo.

Carlos Hyde ran for 27 yards and a touchdown on 17 carries and added a 10-yard catch during Saturday's 23-20 win over Tampa Bay.

Hyde was contained by the Buccaneers defense on Saturday as veteran running back had his second-lowest rushing total of the season. Hyde will look to bounce back in Week 17 when the team faces the Titans who he rushed for 104 yards in Week 15.

Deposit $10 at a DFS partner site you have NOT played at and get a FREE 6 Month HOF Subscription!
Claim Offer
Most Accurate Experts
for Carlos Hyde
Consensus Rankings
View all Flex Rankings