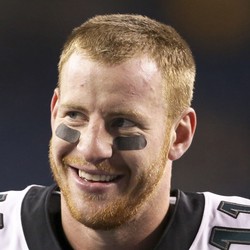 Eagles quarterback Carson Wentz, who left Sunday's playoff matchup against the Seattle Seahawks due to a concussion, posted on social media on Monday that he was "feeling good today and will be just fine."

Playing in his first career playoff game, Wentz didn't make it out of the first quarter after a questionable helmet-to-helmet hit from Jadeveon Clowney. He attempted four passes prior to exiting, completing one of them for three yards.

Eagles quarterback Carson Wentz completed 23 of his 40 passes for 289 yards and a touchdown in Sunday's win over the New York Giants. He did not throw any interceptions and added 15 yards on three rushing attempts.

While he has been throwing primarily to practice squad players over the last couple of months, Wentz has managed to set a new Eagles franchise record for passing yards and help the team win four straight games and the NFC East.

Eagles quarterback Carson Wentz completed 31 of 40 passes for 319 yards and a touchdown in Sunday's win over the Dallas Cowboys. He added 22 yards rushing on six attempts.

Wentz has attempted at least 40 passes in six straight games and has thrown nine touchdowns against just one interception over the team's last four games. He is just 250 yards shy of 4,000 yards for the season as the Eagles head into a Week 17 win-and-you're-in game against the Giants in New Jersey.

While he was not perfect on Sunday, Wentz led the Eagles on multiple drives to gain and re-gain the lead against Washington. With the Eagles fighting for their playoff lives over the last few weeks, Wentz has been putting the offense on his back despite his lack of offensive weapons. He will have a tough matchup next week against the Cowboys at home.

Eagles quarterback Carson Wentz completed 33 of his 50 pass attempts for 325 yards, two touchdowns, and no interceptions in Monday's win over the New York Giants. He also rushed five times for nine yards.

Wentz entered Monday's game with just three healthy wide receivers and ended the game with just one after Alshon Jeffery went down early and J.J. Arcega-Whiteside left the game in overtime. His 325 yards passing were a season-high, as were his 50 attempts. Wentz led a game-tying 85-yard drive in the fourth quarter and a game-winning 75-yard drive in overtime in the comeback win.

Deposit $10 at a DFS partner site you have NOT played at and get a FREE 6 Month HOF Subscription!
Claim Offer
Who Should I Start?
Most Accurate Experts
for Carson Wentz
Consensus Rankings
View All Rankings