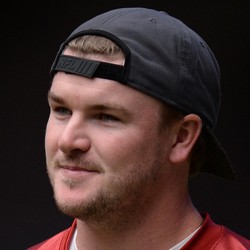 Chandler Catanzaro converted his lone field goal attempt but just one of his three extra point attempts in the Jets' preseason loss to the Giants.

This was a bad start for a kicker with a spotty record. Catanzaro is the only kicker on the roster at the moment, so he'll be playing in the regular season, but shouldn't be a priority option in fantasy leagues.

Panthers K Chandler Catanzaro was successful on both of his field goal attempts and on 3-of-4 of his extra point attempts in Sunday's Week 17 win over New Orleans.

Catanzaro played well with Graham Gano out, but it is very likely that Gano will return as the Panthers kicker in 2019. At worst, both players could be brought back for a competition. Catanzaro should be in the NFL in 2019 in some capacity.

Panthers K Chandler Catanzaro was successful on his only field goal attempt and on his lone extra point attempt in Sunday's Week 16 loss to Atlanta.

Catanzaro had another underwhelming game in Sunday's loss. He will look to finish his journeyman year on a plus note next week at New Orleans.

Panthers K Chandler Catanzaro was successful on his only extra point attempt in Monday night's Week 15 loss to the Saints.

Catanzaro only had one opportunity for points in the loss. He could bounce back in a solid Week 16 encounter with Atlanta.

Panthers K Chandler Catanzaro was successful on both of his field goal and both of his extra point attempts in Sunday's Week 14 loss to the Browns.

Catanzaro made all four of his kicks totaling eight points, which was a pleasant surprise for the Panthers. Not only did Catanzaro get booted from Tampa Bay for his erratic kicking, but longtime Carolina placekicker Graham Gano has had his own struggles of late. So Catanzaro's perfect day might be a sign of good things to come on the special teams front. If Gano is still not back in Week 15, Catanzaro will be a fine upside play against the Saints.

Deposit $10 at a DFS partner site you have NOT played at and get a FREE 6 Month HOF Subscription!
Claim Offer
Most Accurate Experts
for Chandler Catanzaro
Consensus Rankings
View All Rankings