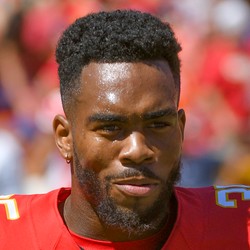 Charcandrick West rushed 13 times for 43 yards and a touchdown while catching all three of his targets for 27 yards in Saturday's 27-17 preseason loss to the Bears.

The Colts picked up West recently to add depth as they lost Spencer Ware and D'Onta Foreman to injuries. The 28-year-old running back will not have a big role on the team and will not be fantasy relevant.

In a corresponding move to placing D'Onta Foreman on the injured reserve list, the Colts signed West, formerly of the Chiefs. While the Colts also brought in former Chiefs back Spencer Ware earlier in the offseason, an injury settlement quickly dissolved that marriage. It is looking more and more like the Colts will open the year with Marlon Mack, Jordan Wilkins and Nyheim Hines at running back, similar to last year.

Charcandrick West rushed once for one yard and had two receptions for 37 yards and one touchdown in the Chiefs' 38-31 loss to the Seahawks Sunday night. He was targeted three times.

West saw some usage with Darrel Williams (hamstring) leaving in the first half Sunday. He managed a nice 25-yard touchdown catch on limited touches.

Justin Mackey1 year ago
Charcandrick West signs with the Jets

The Jets announced on Friday that they have signed running back Charcandrick West.

West rushed for just 72 yards and two touchdowns behind Kareem Hunt last year. With Isaiah Crowell and Bilal Powell the likely 1-2 punch for the Jets to start the season, West is just a depth signing, and it may indicate that Elijah McGuire will be placed on IR. There's no real fantasy value with West absent one or more injuries to the Jets' backfield.

Running back Charcandrick West has been released by the Kansas City Chiefs, reports NFL insider Ian Rapoport on Twitter.

The Chiefs had a crowded running back room with Kareem Hunt's breakout 2017 and former starter Spencer Ware returning from injury, but West had previously carved out a role as a third-down running back who could do some damage as a receiver out of the backfield. West had missed the first two weeks of the preseason with a concussion.