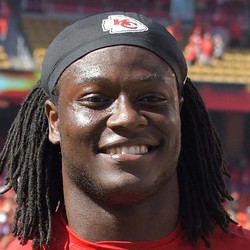 Chris Conley made three catches for 38 yards on six targets Sunday in the Jaguars’ Week 17 victory over Indianapolis by a 38-20 score.

Conley had the best season of his five-year career in 2019 with 47 catches for 775 yards and five touchdowns. The veteran wide receiver should have a solid role in 2020 but will not be a standard league own.

Chris Conley caught two passes on five targets for 56 yards and a touchdown as the Jaguars lost to the Falcons on Sunday by a 24-12 score.

Conley now has three TD catches in his last two games as the 27-year-old has been able to make big plays. Overall on the season, Conley has 44 catches on 84 targets and is worth owning in deeper fantasy leagues.

Conley caught four of eight targets for 49 yards and two touchdowns in Sunday's 20-16 win over the Raiders.

Conley moved up the depth chart on Sunday with top receiver D.J. Chark out with an injury. Conley was a target in the red zone for the Jaguars in the fourth quarter and came away with the two big touchdown catches. Conley could be worth adding in deeper fantasy leagues in Week 16 when the Jags face the Falcons.

Chris Conley secured one of three targets for seven yards in the Jaguars' 45-10 loss to the Chargers on Sunday.

A disappointing game for Conley who had no fewer than four receptions in four of the five games prior to Sunday. It will be hard for the receiver to make a big impact on this offense and Conley is only a deeper league add for fantasy owners.

Chris Conley brought in four of five targets for 57 yards in the Jaguars' 28-11 loss to the Buccaneers on Sunday.

Conley has been solid as the third receiver for the Jaguars and has 14 catches over his last three games. The veteran receiver does not have much upside in the Jaguar offense and is only worth owning in deeper fantasy leagues.