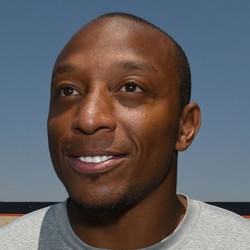 Harris Jr. is one of the best cornerbacks in the game and will make a great addition to the Chargers' secondary that already includes Derwin James and Casey Hayward Jr. Harris Jr. has 20 career interceptions, six fumbles forced and recovered, and four touchdowns. He is one of the few shutdown corners left in the league and his addition to the Chargers is bad news for wide receivers and quarterbacks in the AFC West. The Chargers have made some phenomenal moves this offseason and look to be a top D/ST heading into the 2020 season.

The Broncos are asking for a second-round pick in exchange for CB Chris Harris, according to reports.

Renck notes the high asking price, especially considering Harris is set to hit free agency and has said that he's not willing to sign with a team prior to testing FA waters. Still, Harris is one of the few stud cornerbacks remaining available, and he would help any defense that he joins.

When Harris broke a bone in his leg in Week 13’s loss to the Bengals, the team expressed optimism that he would avoid IR and possibly return for the postseason. With the team now out of playoff contention, it no longer made sense to keep him on the active roster. His season officially ends with 49 tackles, three interceptions and one sack in 12 games.

Broncos cornerback Chris Harris Jr suffered a broken bone in his leg during Sunday’s game but the diagnosis is not as bad as initially expected. Head coach Vance Joseph described the injury as a “small break” that will not require the cornerback to go on season-ending injured reserve.

“He needs rest and rehab and we’ll see how it falls in a couple weeks … It’s great news for Chris, he has time to hopefully recover and build up and hopefully we’re still playing,” Joseph said, via ESPN.com. If the Broncos continue winning, there could be an opportunity for Harris to return for the postseason.

Harris sustained the injury on a first quarter tackle of Bengals receiver A.J. Green. The Broncos also lost defensive end Derek Wolfe in the first half to a rib injury and inside linebacker Josey Jewell with an ankle.