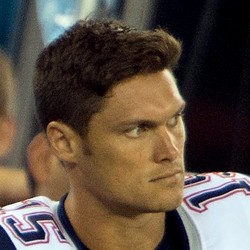 Panthers WR Chris Hogan caught 2-of-4 targets for 14 yards in Sunday's Week 17 loss to the Saints.

Hogan had a season to forget in his first year with the Panthers, posing career-low numbers across the board in seven games played. He will look to bounce back in 2020 but will likely be far off the fantasy radar barring a return to the Patriots as he is a free agent this offseason.

Panthers WR Chris Hogan caught 2-of-3 targets for 16 yards in Sunday's Week 16 loss to the Colts.

Even with D.J. Moore exiting the game early with his concussion, Hogan was not even a blip on the fantasy radar. It will stay that way in Week 17 whether Moore plays or not because Will Grier is likely the QB1 again.

Hogan will now be eligible to play in Sunday's game against the Seahawks. He missed the last nine games due to a knee injury he suffered in October. It is unclear how much of a role Hogan will play, but he expects to take the field for the first time since Week 4. Before the injury, Hogan caught three passes for 24 yards across four games.

Chris Hogan has been placed on injured reserve by the Carolina Panthers.

With only three receptions on the season, Chris Hogan was far from fantasy relevance. He is a candidate to return in eight weeks time, but outside of a major injury to the teams receiving corps, he will not be on the fantasy radar. Offensive lineman Caleb Benenoch was claimed from the New England Patriots in a corresponding move.

Hogan is minimally involved in the Panthers' offense, which will be the narrative while D.J. Moore and Curtis Samuel are healthy. include Greg Olsen in that conversation as well as he is Carolina's pseudo WR3. Hogan is a blip on the fantasy radar in Week 4 against the Texans.

Anthony Cervino - Anthony Cervino41 weeks ago
Who Should I Draft?
Most Accurate Experts
for Chris Hogan
Do Not Sell
Are you looking to contact Customer Support about a subscription or account related question?
Yes
No, I'm a California resident looking for the California Consumer Privacy Act form